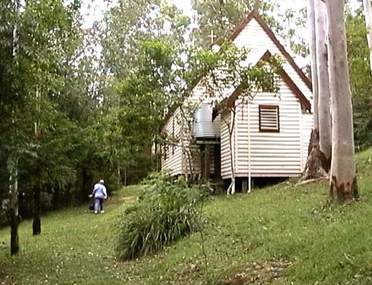 St.Barnabas Church 2003
Yarramalong (which means place of Cedars) was first permanently settled by the families of William Stinson and Ezekiel Waters, who came from Maitland in 1856. Prior to this, the hills and valleys had been logged by timber cutters driving oxen teams from around Wollombi and Maitland.  The Yarramalong and Dooralong Valleys, the mountains above them and other areas in the Wyong area, once abounded with great forests of cedar and hardwood - turpentine, blue gum, rosewood, mahogany and many other varieties of commercial timbers.  A photograph taken in 1906, shows the butt of a giant tree at Wyong Creek which, at 6 foot off the ground, had a circumference of 58 feet and was estimated to be in excess of 140 feet in height.

The Stinson family settled in ‘Stinson’s Lane,’ and the Waters in what is now Yarramalong village.  Another early settler was William Bevan of Brush Creek, who is believed to be the first person to be buried in St. Barnabas graveyard.  Others who came to live in this lovely valley include the Hill, Boyd, Palmer and Fernance families, many of whose relatives can be found in the local area.

As the numbers living in the valley increased, the need for a church building became apparent.  Earlier, services had been held in the homes of the settlers.  St Barnabas Church was built by voluntary labour, under the supervision of James Bailey, his brothers and other settlers.  St Barnabas Church was opened in December 1885, and is the oldest surviving church in the Wyong Shire, and one of the area’s most historic buildings.

Yarrramalong Public School is one of the oldest and most historic schools in the area.  The original school was opened in August 1870, but burnt to the ground in 1872.  It was replaced with a slab structure with a shingled roof, but when this was deemed unsafe, a stone structure and teacher’s residence was built in 1890. George Palmer, who was the schoolmaster from 1877 to 1884 was believed to be the second person buried at St. Barnabas Cemetery.
Article from Gosford Times and Wyong District Advocate 10 July 1924

I came to Yarramalong in 1857, when it was practically a wilderness, and there was only a bush track. Cedar getting was the principal industry. It was carted by bullock teams to Maitland. The nearest Post Offices were at Gosford and Mangrove Creek. When by chance the officer in charge encountered traveller going in our direction he or she would entrust the mail to him. Today we have three Post Offices and telephone communication.

The first school was held by an old gentleman called Usher. Then a lady – afterwards the wife of Mr George Taylor, who is still hale and hearty at The Entrance – opened a private school, and it was from her that I got my early schooling. In 1868, the late Mr W. J. Chapman took up land there and built a slab cottage with a terra firma-floor. His wife opened a small school, and I am thankful to say she brought me along considerably in the few months I studied under her. Mr Chapman progressed with the district, as we all know. What farming was done at Yarramalong in those days was purely for home consumption.

Ourimbah was then known as Blue Gum Flat, and I remember how my mother used to lead the pack horse down the track to sell a few eggs and get things for the home. The old mill used to supply ground wheat and corn, but there was no refined flour. My father was the first man to cultivate planter’s friend in New South Wales. It grew luxuriantly, and he constructed a mill with wooden rollers worked by one horse to crush the cane. He made boilers and cooling boxes to extract the syrup. If we had been possessed of the means he would have gone in for the manufacture of sugar. I often heard him say so. Then he went in for arrowroot-making and succeeded in getting bronze medals in Paris and Philadelphia.

​In 1879 he abandoned that and took to saw-milling, which he carried on successfully until his death in 1903. There were in those days only two saw mills in the Brisbane Water district, and Wyong was a forest full of dingoes, wallabies, brumbies, and wild cattle.

Note: The author is a son of James Waters (King of Yarramalong)
Powered by