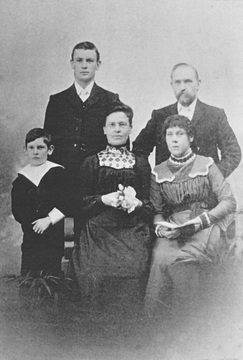 Frederick and Mary Baker with Frederick (Gersh), Norman and Eleanor
​


​Frederick Gershom BAKER (Gersh) was  born in Sydney in 1885 to Frederick and Mary (CUTHBERTSON) BAKER.

​Gersh BAKER used to visit Gorokan with his friend Eldred EDWARDS in the early 1900s. In 1906 he leased a room at the old Royal Hotel and used this as his dentist surgery on Saturday mornings, and spent the rest of the week in his father’s Sydney dentistry practise.  There was so much demand for a dentist in Wyong, he soon opened on Wednesdays, and before long was practising full time. 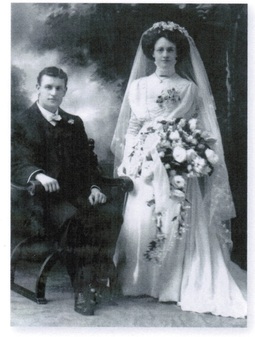 Frederick (Gersh) Baker and Olive Trevitt
In 1909, at the Wyong Show, Gersh met Olive TREVITT, and they were married 18 months later at St James Church of England. They had three children.
Gersh was very prominent in all aspects of sport in the Wyong District, Secretary of the Brisbane Waters Pioneer Association, Ringmaster of the Wyong Show and was also on the Committee of the Agricultural Association for 37 years.. He was the first Dentist in Wyong and practised till his demise in 1948. . Gersh was one of the founding members of Wyong Golf Club - the course was originally located inside the Wyong Racecourse.

During his lifetime in the Wyong area Gersh encouraged football, cricket, golf and lawn bowls.
When Gersh BAKER died from Stomach Cancer in 1948, his funeral procession was over two miles long – a testament to the regard and affection the people of Wyong had for him.  The old Warner Sports Ground was officially named Baker Park.

Excerpts taken from ‘The Day We Celebrate – a history of the Wyong District Pioneer Assoc.’ 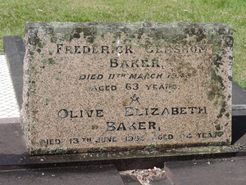 ​Frederick and Olive BAKER are buried at Jilliby Cemetery.
Powered by