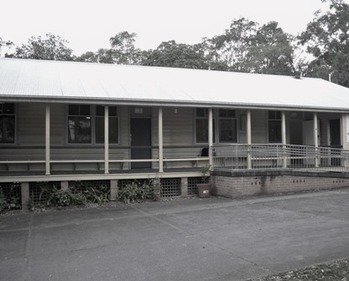 Old Warnervale School c2000
The development of Warnervale was first undertaken by Albert Hamlyn Warner who, in 1893 acquired 12,000 acres (49 km2) of land in the area. Albert Warner was probably one of the Wyong area's most notable residents and was strongly influenced by his travels in both Japan and the United States, which is today evidenced in road names in surrounding suburbs such as Minnesota, Virginia, Louisiana, Hiawatha and Nikko Roads, as well as his family home which was named ‘Hakone’ after a park he had seen in Japan.

The Warnervale Regional Uniting Church was built in 1921, and was originally a Methodist Church.  The money to build the church was raised by local families and the Methodist Church Aide Society by running fetes, parties, socials and the annual harvest festival. Early families to settle in the Warnervale area were the Dent, Mascord, Walker and Murray families.

The very first Warnervale School, was not at the hamlet of Warnervale as it is known today.  The Warnervale School, established in 1911 was built at Kanwal, 3 km east of Warnervale.  In the 1920s, residents agitated to have the school moved from Kanwal closer to the Newcastle to Sydney railway line.  School buildings in 1988 consisted of a double classroom, a freestanding library, toilet block, staff amenities block and two demountables.  The school was closed in 2009 and the pupils moved to the new school on the corner of Minnessotta Road and Warnervale Road.

Warnervale was first identified as a growth area in the Sydney Region Outline Plan in 1968. Over time the area originally known as Warnervale has been gradually subdivided into a number of other suburbs, including Kanwal, Watanobbi, Hamlyn Terrace, Wadalba and Woongarah. Once composed of large acreages and significant wetlands, the area has rapidly been developed into a series of residential estates.
Powered by