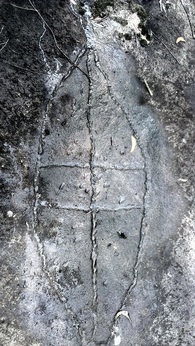 Aboriginal Shield Garigal National Park
The original inhabitants of the area that is now the Wyong area were the Aboriginal people called Darkinjung.    An excellent article about the Darkinjung people has been written by Paul Budde

“The Darkinjung people occupied an area with a small strip of coastal land between Gosford and Wyong.  The Watagans was their border with the coastal Awabakal people. The northern border with the Wonnarua (Hunter Valley) people was more or less the watershed between the Hunter and the Hawkesbury Rivers formed by the Northern Watagans under Kurri Kurri and Cessnock, the Hunter Range north of Wollombi, and the Howes Valley.  All the way down to the end of the Wollemi National Park, the peaks of Mount Monundilla, Mount Coricudge and Tyan Peak (north of Lithgow) formed a natural border with the Wiradjuri People.
The southern border more or less followed the Hawkesbury River.  However, the Dharug occupied the Brisbane Waters area north of the Hawkesbury.
It is estimated that the Darkinjung population was some 5,000 at the time of settlement.  All the people mentioned spoke the Yuin-Kuric language and the Kamilaroi, a powerful group occupying mid-west NSW, dominated their social structure.  The Darkinjung went into Kamilaroi land for what were termed wife raids, and there are recorded wars between the Kamilaroi and the Darkinjung. But, on the other hand, the Kamilaroi were allowed to cross the border for their annual religious ceremonies near Mount Yengo.”