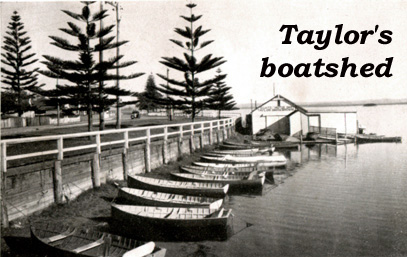 ​George Henry Edward TAYLOR was born 1840 in Punchbowl, NSW, as a second generation Australian to Edward and Jane (PEARSON) TAYLOR ​. Edward TAYLOR and his family arrived at Blue Gum Flat (Ourimbah) around 1840 and later settled at Tumbi Umbi.

In 1854 Edward's wife, Jane TAYLOR, acquired all of what is now known as The Entrance. Other members of the TAYLOR family owned tracts of land in many areas of Erina Shire.

In 1864, George TAYLOR married Elizabeth BRISTOWE an English girl who was governess with the KELLY family at Popran. They had 7 children.

George Taylor was always happy to tell stories illustrating the hardships the early settlers endured, and always gave the highest credit to the pioneers who transformed this great district from virgin forest and scrub into a fertile productive area.
An obituary for George Taylor in the Wyong Advocate Newspaper states that “as the oldest of the district pioneers he epitomises the splendidly courageous spirit which conquered the great obstacles to early settlement. Following on his childhood in a pioneering home he became a school teacher and had schools at Cooranbong and Cape Hawke, among others. Later, at various periods he had properties at Ourimbah, Tumbi and The Entrance. He was a popular and respected doyen of the Pioneers’ Association. He was also President of the District Progress Association in its early years and was a keen worker for local interests in other organisations. His inspiration and ability furthered many projects which at first seemed impracticable, but thanks in great measure to his energy and foresight were brought to fruition.  It was reported that he had been the oldest rider of racehorses in NSW and had piloted his first winning mount, ‘Jerry’s Sneak’ at Gosford in 1852. He had been a good athlete in his youth, and had run a footrace in Pitt St, Sydney when there was still grass in the street! He was known as ‘Uncle George’.”

Excerpts taken from ‘The Day We Celebrate – a history of the Wyong District Pioneer Assoc.’

George Henry Edward Taylor died at Gosford in 1935, and is buried at Wamberal Cemetery.