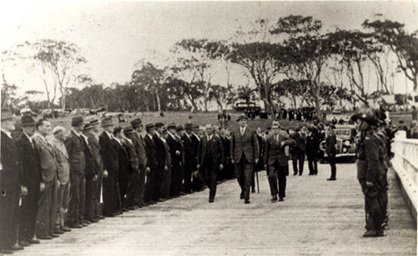 Opening of Toukley Bridge 1939
The villages of Toukley and Gorokan are connected by Wallarah Point Bridge, which is situated at the junction of Lake Budgewoi and Lake Tuggerah.  The bridge was opened by Governor Lord Wakehurst, in April 1939. Contingents of children from schools at Wyong, Toukley, Tuggerah, Wyong Creek, Jilliby, Wanda, Yarramalong, Ourimbah, Kanwal, Wyee, Tacoma and Dooralong attended. A new bridge was built beside the old bridge in 1985. Throughout the lakes area there are many fishing spots, but one of the most popular is at either end of the bridge, either from a boat, the old bridge remnants or on the rocky foreshore.

Toukley itself is laid out on a narrow peninsula bounded by the lakes.  A few kilometres further on the area spreads out, with Budgewoi, Halekulani and Buff Point at one end and Norah Head at the other.

Canton Beach, part of the Tuggerah Lakes system, is still a popular place for swimming, especially for families with children due to the fact that they can wade out for many metres on the shallow sands.  Canton Beach is famous for prawning, and it was here in the early days that Chinese fishermen dried prawns for export to China – hence the name Canton Beach.

Some of the early families in the Toukley/Gorokan areas were the Denniss, Davis, Duncan, Conley and Holmes families.  Many are buried at Noraville Cemetery.

The first school opened at Toukley in 1891, but due to lack of enrollments it was closed a year later –  the increase in population by 1896 necessitated the erection of another school. It was again closed between 1920 and 1935, but Elizabeth and Ruth Hargraves, although not fully trained, filled in as teachers in a building opposite the now Jenny Dixon Reserve at Noraville.

When the school building at Noraville was burnt down in 1941, Mr Ned Hargraves donated the present Toukley school site to the Education Department. Early headmasters were Jack Evans, Ted Jones and Ted Malcolm.

Information taken from “Toukley 100 years” by Noel and Robyn Gambril, and “From Pudgeway to Budgewoi” by Bruce Russell