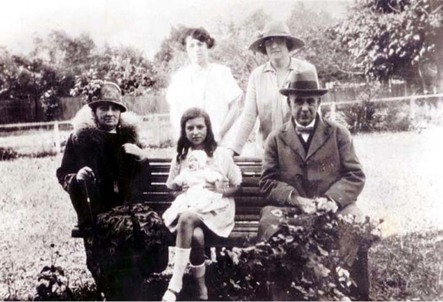 Albert Warner and Family
Albert Hamlyn WARNER immigrated to Australia with his parents and three of his siblings. Four more were born to his parents after arriving here. Albert was indentured as an apprentice plumber in Sydney and eventually became very successful. He laid most of the original water pipes in Elizabeth Street Sydney and owned businesses and land in many Sydney suburbs.

He then ventured north and purchased land in Woy Woy and built shops running parallel with the Woy Woy Railway. During 1881 he married Mary Ann BOYCE and the couple went on to have four children. The family lived at Point Piper where Albert WARNER had built several houses. He also had shares in mines and purchased two bakeries, which he later sold to their managers. In 1903 Albert purchased land in the Wyong Shire, an area stretching from Jilliby to the Wyong River and as far north as Wallarah creek.

Albert’s business affairs prospered in the Wyong Shire so he decided to move his family to the region. It was then that he built his first home on the banks of the Wyong River called The Camp. This was moved off site during 1912 and he then built his dream home called Hakone, which later became a most successful holiday guesthouse.

Albert WARNER had an office in Sydney, one in Wyong and another at Warnervale. It was said he owned all the land his eye could see from the turret of Hakone.  He  built over 100 private homes in the Wyong Shire, some still stand today. He also built the shops in the main street of Wyong and named many of the streets in the shire, including Levitt Street (named after his grandson, Levitt HUNT), Warners Avenue, Renraw (Warner spelt backwards), Elsie Lane, Boyce Avenue, Gale Avenue, Leppington Street, Ithome and Rockleigh Streets (both named after homes in Point Piper) and also most of the streets in Warnervale, which he named after cities his son Leslie visited while touring America including Arizona, Minnesota and Louisiana.

Albert WARNER will also be remembered for his generosity; he was a giver within the community and donated the first ambulance to Yarramalong; sponsored many football and cricket teams and purchased the first Australian flag for Wyong Public School. He also donated two plots of land to the Catholic Church and Church of England. 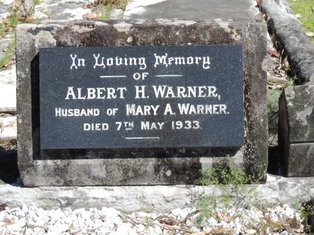 Albert Hamlyn Warner is buried at Jilliby Cemetery
Powered by