Tuggerah is situated on the western side of the most southern of the three lakes that form the Tuggerah Lakes. It is 2½ kms south of Wyong. The name Tuggerah is of Aboriginal origin and is thought to mean cold or bleak, and windy. 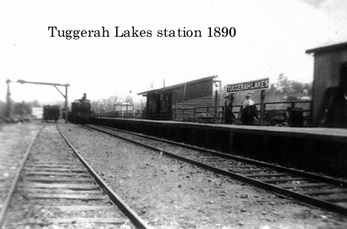 Prior to 1900 settlement in the area was sparse, however with the building
of the Sydney to Newcastle railway in the late 1880’s, numerous small farming lots were established in the area around Tuggerah where the main occupations involved dairying, cattle grazing and timber getting. A local fishing industry developed after a railway platform was built at Tuggerah (named Tuggerah Lakes station) in 1891. A school at Tuggerah was established in 1892. 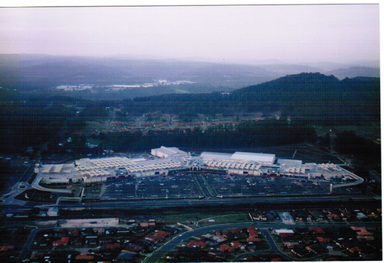 Arial view of Westfield Tuggerah Shopping Centre 1995.
Tuggerah remained as a rural community with dairying, citrus growing and market gardening as the main form of land use. By the 1970’s, by which time the railway line had been electrified and road links to Sydney had been improved with the Sydney to Newcastle motorway, the Tuggerah area became home to commuters and gradually farming gave way to housing developments. By the end of the twentieth century Tuggerah was home to two major shopping complexes, numerous housing estates and small industrial estates. A once sleepy village had been swallowed up by progress.