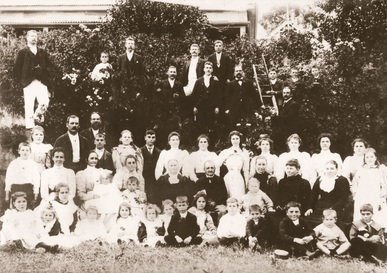 The Gascoigne Family 1898
​Extract taken from ‘Branches of our Family’ by Susan Buck.

The Gascoignes of Wyong Shire
In  the late 1890s the three GASCOIGNE brothers, Thomas, John and Robert would travel to Tuggerah Lakes for holidays – camping, shooting and fishing. The GASCOIGNE family came from the Ryde area of Sydney, they owned a great deal of land on the Putney foreshore where they had businesses building commercial boats and light racing sculls.

They would travel to Wyong by train from Sydney to the new railway station at Wyong and then take a launch down the Wyong River.

The town of Wyong was beginning to grow with the expansion of the northern railway when a Sydney journalist, writing in 1896, left us with this account of the district and its potentialities:
'Sometimes one wants to get away from the wear and tear of city life. Only two hours in the northern train takes one into the quiet solitude of the primeval forests, where the climate is as mild as that of Sydney. The Tuggerah Lakes are in close proximity to this dense forest, and the largest is a fine sheet of water where fish of several species abound. Wyong Creek is the backwater from the lake. Just where the railway bridge crosses Wyong Creek is growing up a small town or village named after the creek. A ferry is maintained here, as there is no bridge for traffic, other than the railway.'
(A road bridge was built across Wyong River in 1901.)
He goes on to say:
'This district with its splendid forests and miles of rich soil is very sparsely populated. The people live chiefly by timber cutting for the sawmills, or by fishing. A few cultivate patches of land, growing maize, potatoes, etc. Nearly all kinds or fruits grow luxuriantly here, also every kind of vegetable, and all cereals but wheat.
The climate is superb, and the facilities for conveyance of produce to market most excellent, as there are both rail and water ways at hand. The land is capable of sustaining a large population, yet the district is almost as untilled as when Captain Cook sighted Australia. If a few enterprising men were to take the matter in hand the beautiful lakes would be surrounded with villa residences, and the place would throng with tourists.'
In 1903 Albert Hamlyn WARNER bought 12,000 acres to the north and east of the Wyong township and subdivided the land into small farms, weekend blocks and shop sites.
By 1906 Wyong was officially classified as a town and among the first buildings erected were two small hotels, or rather inns. The Royal Hotel, built on the south end of the town in 1889 and the Commercial Hotel (later named the Grand Hotel) at the north end, in 1892. Both of them were wooden structures. 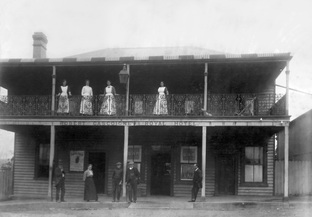 The Royal Hotel, Wyong – bought by John Gascoigne in 1899 and later owned by Robert Gascoigne in 1904. The hotel was rebuilt in brick in 1919.
​In their trips to Wyong and Tuggerah Lake the GASCOIGNE brothers had seen the potential of the area and in 1899 John GASCOIGNE bought both the Royal and the Commercial Hotels. John managed the Royal and his brother Thomas was licensee of the Commercial.
Robert GASCOIGNE remained working with the business in Ryde but he would come up to Wyong on race days and other busy times to help at the hotels. In 1904 a financial arrangement was made between the brothers – Robert bought the Royal from John and as part of the deal John took over Robert’s property at Ryde. 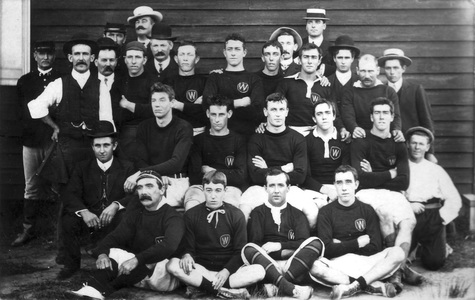 Wyong Football Team, circa 1910. Robert Gascoigne Snr, back left (with white hat and moustache), Robert Jnr in front of him (with cap), John Gascoigne, 3rd from right in centre row seated.
​​
At this time Robert left Ryde with his wife Marie and two sons (Robert Jnr aged 17 and John aged 15) and settled in Wyong where he remained for nearly thirty years.
As befitting a publican in a country town he soon became prominent in civic affairs – in the founding of Wyong Sports Club in 1905, in establishing the town band (in which his younger son John played the cornet) and also the Wyong Bowling Club in 1912.

For many years he was a leading member of both the Masonic Lodge and the Oddfellows Lodge. For Robert and his family it was a good time. He owned a private launch on the Wyong River, used mostly by his sons. He also owned some prize racehorses – trotters and pacers – which were driven in gigs by his younger son John who as well as being an outstanding horseman, was also a star winger in the local football team. Robert Snr was one of the first in Wyong to own a motor car – an imported American Buick.
In 1932 Robert retired from the hotel. He had a house built for himself in Byron Street, Wyong and he divided the bulk of his property between his two sons. Robert Jnr, was given property in Ryde and John was given the ownership of the hotel under a mortgage from his father. The gradual repayment of the mortgage constituted Robert Snr’s income for the rest of his life. He died in 1951 at the age of 90. 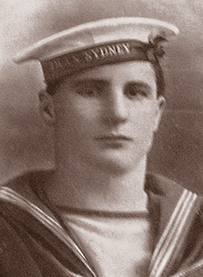 Tom ‘Gunner’ Gascoigne was a gunner in the navy on HMAS Sydney. 1914
​In 1904, the same time his brother Robert took over the Royal, Thomas GASCOIGNE sold the Commerical Hotel and it passed out of GASCOIGNE ownership. Thomas had acquired 60 acres a Pipeclay Point in the 1890s in the area now bound by Howelston Road and Gascoigne Road, Gorokan. He went back to fishing and boat building and he built and operated the ferry ‘Wyong’ designed to carry about fifty passengers and with a draught shallow enough to negotiate the sand bar at the mouth of the Wyong River and the sea grass beds of the lake.

Wyong was the gateway to the lakes and in what is now the riverside park there were wharves from which ferries carried passengers and goods to The Entrance and other places around the lakes.
Thomas made a good living fishing, farming his land and building boats for other fishermen. He had an orange orchard and also grew excellent grapes and other fruit. Thomas’s first marriage to Lydia MOON produced four daughters and his second marriage to Sarah PATERSON produced three daughters and three sons.
Of all of Thomas and Sarah’s children, the one who achieved the most fame was their eldest son Thomas, known as “Gunner” GASCOIGNE. As a member of the crew on the HMAS Sydney he was wounded, losing an eye, in the Sydney’s celebrated victory over the German light cruiser Emden in the Indian Ocean in November 1914, soon after the beginning of WWI.
He also claimed to be the first, or among the first, Australian servicemen to set foot on enemy territory. This was immediately after the outbreak of war when a party from HMAS Sydney landed near Rabaul, the capital of the German colony of New Guinea, in order to destroy the radio station there.

When he returned to Wyong in March 1915 he was given a hero’s welcome and presented with an illuminated address and a purse of sovereigns by the Wyong town leaders. Thomas married Mina DUNCAN and had two sons, he went back to fishing on the lake and in later life was a Fisheries Department inspector at the Sydney Fish Markets.
His younger brother Roy joined the navy at the end of WWI, he remained in it through the inter-war years and served on HMAS Perth in WWII. Roy married Eva BEDDING the daughter of Ernest BEDDING who was a builder and had a poultry farm and some lemon trees near where the Wyong hospital now is at Kanwal. 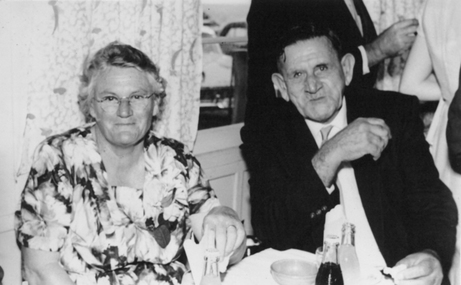 Madge (Gascoigne) and Ern Buck c1960
​Madge GASCOIGNE  married Ernest BUCK in 1923. Ern’s sister Bertha BUCK married Byron LEGGE and they settled at Tuggerah and raised their family. My dad told me that there were three families in Wyong around this time, named HAND, FOOTE and LEGGE and they all lived in the same street.
We think Ern Buck first travelled up to Wyong to visit the Legge’s, but there is also talk he met Charlie CRAIGIE, who lived at Kanwal, when he was working at the Sydney Fish Markets and Charlie convinced him there were opportunities a plenty to be had at Tuggerah Lakes.
Ernest and Madge settled on land at Pipeclay Point, which was Madge’s division of Thomas’s estate. Ern was a builder and fisherman and they grew vegetables – lots and lots of cabbages according to my dad and Aunty Hazel who had to harvest them for market.

Madge was a very generous and hard working person.
An extract from her obituary in The Advocate in 1968 reads:
As a young girl Madge was one of the first pupils of the Kanwal Public School when it opened in 1911 and she later took an active interest in the school as a parent. Mrs BUCK formed the school’s Mother’s Club and was its secretary for 12 years.
An honest, frank, forthright person, Mrs BUCK became a pillar of the local community. In March 1955 she inaugurated the Toukley Girl Guides and was elected as president, a position she held until her death. A strong supporter also of the Boy Scouts movement, she was elected a patron of the Toukley Boy Scouts five years ago and re-elected each year.
Mrs BUCK joined the Toukley RSL Women’s Auxiliary in 1953 and was a staunch worker. It would be impossible to enumerate all that Mrs Buck did for the local community. Hers was one of the most familiar faces at street stalls for many different charities. Whenever there was community work to be done, Mrs BUCK could always be relied upon as one of the “willing horses”.
Madge’s youngest brother Jimmy GASCOIGNE  married Betty STACKMAN from the STACKMAN and WATERS pioneering families of the Yarramalong Yalley. Jimmy and Betty managed the ‘Top Pub’ at Wyong for a time, then moved over to The Entrance. They spent a brief time at Narrandra in the Riverina, then back to Wyong, first to Panania Road, then to their house in Jennings Street, where they lived for 45 years.

​For those of us who have lived in the area, fished on the shores of Tuggerah Lake and grown up and played on the beaches around Norah Head – we are ever grateful to our enterprising pioneers for taking a chance and staking their claim in the Wyong Shire.