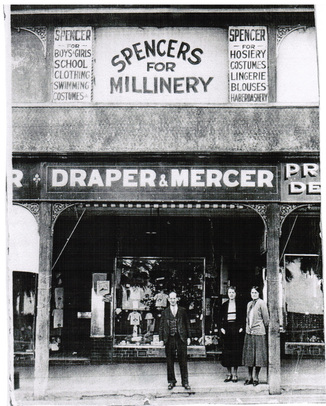 Clarence and Constance SPENCER (left and right, centre is Jean BURRASTON)
SPENCER , Clarence (Jim) was born 9 July 1886 on Cowes Isle of Wight.  He was the son of William SPENCER and Mary Ann MASTERS
He arrived in Australia on the Mauritania in February 1912
Clarence died 26 October 1961 at Wahroonga NSW and is buried at Lisarow Cemetery, NSW
Clarence married Constance Annie RICHARDSON in 1915 at Moss Vale NSW
Constance Spencer died 20 May 1939 and is also buried Lisarow NSW
Clarence and Constance had two children, Ian Ison (Peter) and Annis Margaret.

Clarence SPENCER purchased a small clothing store at 68 Railway Street Wyong NSW in 1923. The shop was approx 13ft x 14ft with a dining room and kitchen at rear, with sleeping accommodation upstairs. French doors opened to a wide verandah over the footpath. After Boyer’s Chemist Shop moved to the present location, the shop next door was also rented for much needed extra space. After World War II the two shops were purchased from the Warner Estate.  In 1952 Ian (Peter) SPENCER joined his father in the business, first as an assistant and eventually as a working partner.  Substantial extensions were underway when Clarence died aged 75 in 1961.
Clarence became an Elder of the Church, a Mason, a bowler, Member of the Chamber of Commerce, Member of Rotary International and a friend to many.


When Clarence SPENCER died in 1961, there were many articles in the local newspaper mourning his passing. The Wyong Advocate had this item

One of Wyong’s oldest and best loved businessmen, Clarence Spencer, died last Thursday in a Wahroonga hospital at the age of 75.
The late Mr Spencer was an active businessman in Wyong for 38 years.  He opened up the Railway Street Drapers and Mercers Store which became known as C. Spencer and Son Pty Ltd in 1923.
He worked in the shop – now managed by his son Ian – until a stroke put him in hospital early in September this year.
Born at Cowes in the Isle if Wight, Mr Spencer came to Australia in 1912.

Taking advantage of his apprenticeship served in England, he obtained a job as drapery assistant at Moss Vale, where he met and married his late wife Constance.
Mr Spencer belonged to lodges including the Masonic, and was an elder of Wyong Presbyterian Church.He was liked for his gentlemanly disposition, sincerity and quiet sense of humour.
A bowler for many years, the late Mr Spencer is believed to have been a foundation member of Wyong Bowling Club and also of Wyong Rotary Club.
He was predeceased by a brother Percy, who for many years was the tailor at Nowra.  He corresponded with his other brother Ison, who is 86 years old and still lives in England.

After a funeral service in Wyong Presbyterian Church last Saturday morning, his burial took place beside his wife in the Lisarow Cemetery.
Powered by