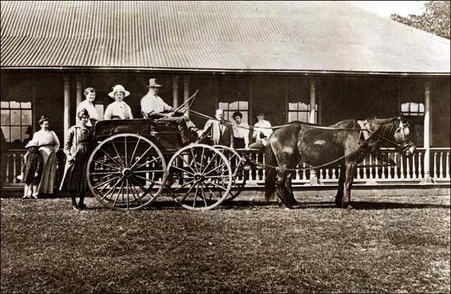 Hargraves Family
Edward Hammond HARGRAVES was born 7th October 1816 in the Parish of Gosport, Hampshire England, the son of John Edwards HARGRAVES and Harriet WHITCOMBE.  Edward HARGRAVES arrived in Australia in 1832 - he became a Farmer, Hotelkeeper and Storekeeper.
In 1836 he married Eliza Elizabeth MACKIE at St Andrew’s Scots Church, Sydney.

Edward HARGRAVES was for many years credited with discovering gold in Australia, however there has always been controversy regarding this claim.  He had spent time in California prospecting for gold and felt the areas where it was found were very similar to places he had seen in NSW.  Gold had been sighted prior to HARGRAVES’ claim; however the Government, fearful of the consequences on business and the pastoral industry if workers left for the goldfields, kept the discoveries quiet.  Edward HARGRAVES organised the first prospecting trip to discover gold in New South Wales around 1850, accompanied by John Hardman LISTER and James TOM.  More can be read of this time of his life in the Australian Dictionary of Biography.

Edward HARGRAVES spent a large part of his later life on his property 'Noraville' from which the suburb was named. This area lies between Budgewoi and Norah Head. He had purchased the land at Bungary Norah from Robert HENDERSON in 1853, and the home was built almost entirely of cedar by 1857 and is said to have replicated his grandfather's house in England. The family entertained many distinguished guests at their home which is one of the oldest properties on the Central Coast.  His wife Eliza MACKIE is believed to be the first white woman to settle in the district.
Edward Hammond HARGRAVES died 29th October 1891 in Sydney and is believed to be buried in the Anglican section of Waverley Cemetery.
See Trove website for information, speeches, writings, etc. of Edward Hammond HARGRAVES.