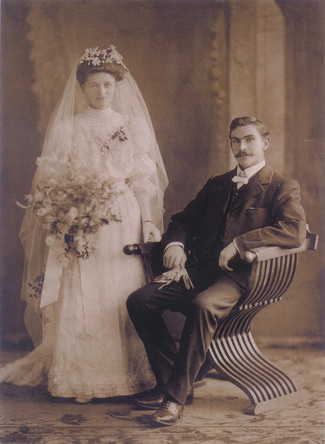 Arthur and Mary Jane Bryant, 1906
The BRYANT family arrived on the Central Coast in 1932. Arthur BRYANT was a successful Builder and Real Estate Agent, owning and operating Bryant’s Real Estate in Hurstville, NSW. Arthur and his wife Mary were the parents of 9 children, five boys, one deceased and four girls.
The Depression was hitting hard at the time and two of his sons Edward (Ted) and Stanley (Stan) who worked together as plasterers were having difficulty finding regular work.
Arthur and Mary purchased approximately 58 acres of land at Cobbs Road, Tuggerah for the express purpose of allowing Ted and Stan to farm the land and provide security for their future. The property was purchased in January 1932 from Charles Alfred COX for the sum of £950. Ted and Stan duly repaid their father and acquired ownership in July 1945.
There was an established homestead on the farm, however, Arthur and his sons built a new home on the farm to  accommodate the family and visiting family members. The farm’s main produce was citrus and free-range chickens for eggs and meat. Although these were the staple farm products, over the years many other types of fruit and vegetables were grown. The farm produce was either sold locally or supplied to the Sydney markets, one wholesaler being Ted and Stan’s cousin Arthur MESSENT. Apart from farming, all vehicles and equipment were serviced on the farms. They would also convert disused car engines to water pumps for the farm’s four dams.
Arthur was not the first member of the Bryant family in the area; his cousin James Henry (Harry) BRYANT was the stationmaster at Tuggerah Railway Station. Harry was also a landholder in the area as was his brother Leslie.
Arthur retired from his Real Estate Agency and left its management in the hands of his son Victor. So along with Ted and Stan and younger daughters Phyllis age 12 and Betty age 7, Arthur and Mary moved to Tuggerah. Betty was the first of a long line of Bryant children to attend Tuggerah Primary School over the ensuing years.