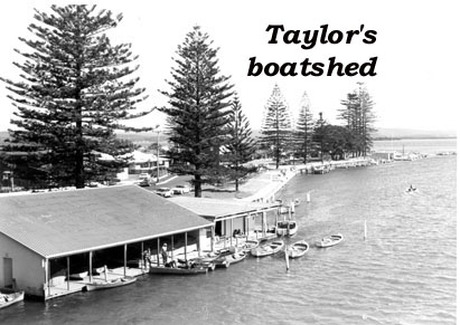 The first known report of The Entrance area was when a search party was sent north to look for escaped convict Mary Morgan (known as Molly Morgan). Their search included a lagoon between Broken Bay and Cape Three Points which was “within the sea beach of about twenty miles in length, parallel with the sea coast”. This lagoon was Tuggerah Lakes.  The area we know now as The Entrance has been called by several names since the first grant of lands was issued n 1826.
The 640 acre free grant was given to Henry Holden who became the area’s first selector and resident, using much of the land for dairy farming. The property was called ‘Toowoon’.
The property gained its second name in 1836 when it was sold to Thomas Cade Battley, who named the farm Terilbah. It covered an area from the lake up to the present Toowoon Bay Road.
The property changed hands again in 1842 when it was bought by William Foster.
The pioneering Taylor family acquired the land in 1854 when it became known as Tuggerah Beach – a name which remained in common use until 1911.
A receiving officer for the Post Office, opened the area under the name Karagi.  Karagi was the Aboriginal name for the point on the south bank of the channel – it’s meaning being ‘the door’ or ‘the way in’.  However, the name was not popular with locals who made representations for the English interpretation, The Entrance, to be adopted.  Their voices were heard, and on November 15 1911, The Entrance was born.
The total population of permanent residents at the time was under 100 – a far cry from today.
One of the features of the areas progress was the community mindedness of the early settlers who were always willing to lend a helping hand.  A prime example of this was the clearing of The Entrance channel in 1939.  The channel had been blocked for nearly two years which resulted in the lakes rising and flooding on the foreshores.
Erina Shire Council decided the only action to remedy the problem was to supply men with scoops and two horse teams to scoop out a channel.  After a certain depth was reached, the horse teams could no longer work because of the danger of quicksand, so manual labour took over.  The clearing of the channel saw crowds work in relays day and night to win a share of the thousands of fish which were eager to reach the sea.
Powered by