Early Schools in the Wyong Shire 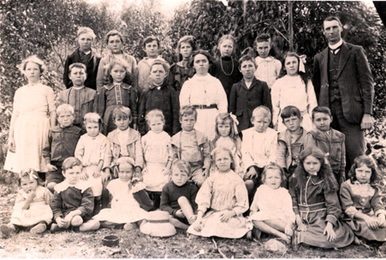 Dooralong School Pupils with Samuel McKimm c1920
This information has been compiled from many sources - at the bottom of this page, you will find a list of some of the books used - many are available in the Wyong Family History Library. Wyong Family History Group has many photos of schools, students and teachers, (some with names) in the Photo Catalogue.
The teachers listed are some of those involved in the early years of the schools with their date of appointment where known.


Cedar Brush Creek Public School
Cedar Brush Creek school opened as a provisional school in 1901, and was re-classified as a Public school in 1905.  When the original school was burned down in April 1903, a replacement school was built and opened for classes in August 1903.  By 1935 the enrolment had dropped to eleven pupils, and the school was closed.  Due to fluctuating school age population the school closed and re-opened three times, until it was closed for the last time in 1980.
Teachers: Edwin Birgin 1901, Florence Bronger 1901-1903, Mr Hutchinson 1903-1907, F Miller 1919-1920, James Hogan 1920-1926 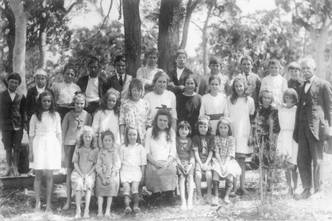 Kanwal School Pupils c1923
Jilliby Public School
Jilliby Public school was opened by William Baldwin on 5th May 1889.  The Bunya Pine which grew in the front of the school for many many years, and is used on the school emblem, was planted by Mr Baldwin. The school was damaged by fire in 1908, but continued functioning with teacher William Ross holding classes in the damaged building.
Teachers: William Baldwin 1889-1908, William Ross 1908-1915, David Lloyd-Jones from 1915-1921

​Kanwal Public School
In 1910 the district as Kanwal began to be opened up for settlement.  In June that year a petition for a provisional school was sent to the Education Department and it was expected that the initial enrolment would be 18.  The settlers were farmers on small holdings of from 25 to 100 acres.  The application was granted and Mr A.H. Warner, owner of the Warnervale Estate offered a site of two acres free to the Department.  The building was completed in February 1911, and the first teacher was William Marshall.  Mr Marshall lived in Wyong and drove to school in a sulky – the road was no more than a bush tra ck.
Teachers: William Marshall 1911-, Emily Pratt 1919-, Percival Ruane 1921- 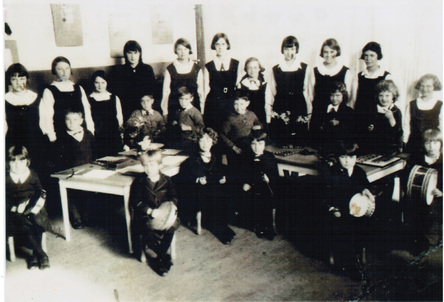 Knightswood School Pupils c1933
Kangy Angy
​Kangy Angy School, built in 1878, had served a wide area since its inception including Wyong Creek and Tuggerah as well as Kangy Angy.  It was situated on the Gosford to Maitland Road on what was known as Cobb's Hill, near where the Mardi Dam is now.  It was closed in 1894, and the students re-allocated to Tuggerah School.

​Knightswood Ladies College
This private school was held in various venues around Wyong town area and ran from approximately 1930 till 1938.  Lucy Ritter, wife of Edward Ritter, was the principal.  Edward and Lucy Ritter later moved to Queensland. 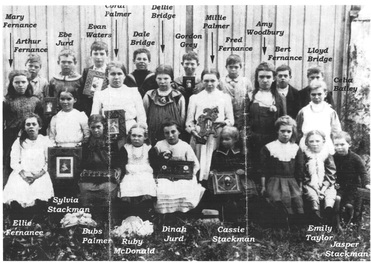 Ravensdale School Pupils c1912
Ravensdale Public School
​Ravensdale school opened as a provisional school in 1892, and was re-classified as a Public school in 1896. Prior to a Government school being established, some of the children were taught by a Miss Wilson at her private school.  The school was opened in March 1892, with Elizabeth Wylie teacher in charge.  In 1919 the original school was found to be inadequate and a new school was built.  This building was burned down after a Parents and Citizens meeting in 1934, and lessons continued in the weather shed until a new building was erected.
Teachers:  Elizabeth Wylie 1892-1896, Elizabeth Rennie 1896-1905, Arthur Hawthorne 1905-1923, James Hogan 1926-1956

​St Celia’s Catholic Primary School
When the Sisters of St Joseph set up a Convent on land provided by Samuel Whittle in 1915, they provided boarding accommodation for girls from outlying areas, as well as classes for children with ages ranging from six to thirteen.  The only available building that could accommodate and facilitate classes for the children was the Parish Church.  Sisters M Raymond and M Dora began the first classes.  School fees were sixpence per child.   Sisters Raymond and Dora remained teaching this way until 1921 – it was another two years before the first classrooms were built.
Toukley Public School
The first school opened in September 1891 in Norah Head, in the vicinity of Jenny Dixon Reserve.  Miss Elizabeth Hargraves was reported to be the first teacher, however department records state that the first teacher appointed by the Department was Charles Rackitz. Toukley School was originally known as Noraville.  It closed one year later for five years and closed again for another fifteen years between the two wars.
Teachers: Elizabeth Hargraves 1891, Charles Rackitz 1891-, Jack Evans 1938- 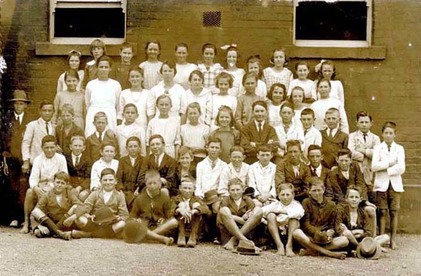 Wyong School Pupils c1912
Tuggerah Public School
When an application was submitted to the Department of Public Instruction for the establishment of a public school at Tuggerah in 1890, there was opposition from Wyong Public School and Kangy Angy School.  They felt that it was unnecessary for another school to be built so close to the existing schools – despite the opposition, Tuggerah School was opened in 1892.  School furniture came from the old Mullet Creek School.  The school opened with an enrolment of 27 pupils, with Thomas Taylor as its teacher.  In 1895 the school was re-sited to its present position.  The old Kangy Angy school was demolished in 1895, and some materials were used to build the weather shed at Tuggerah.
Teachers:  Thomas Taylor 1892-, Michael Tuohy, John Richards, John Beattie, Nathaniel Pye

Tumbi Umbi Public School (now Berkeley Vale Public School)
An application for the establishment of a provisional school was made on 1st September 1911.  It was stated that the nearest school was over two miles away at Wamberal, while nine boys and seven girls resided in the area. In December 1911 a Mrs E Hargraves offered a site for the school but it was not until April 1913 that the work was commenced. Due to a drop in children available to attend, it was decided to open the school on a half-time basis with the proposed school at Tuggerah Entrance – now know as The Entrance.  A new school opened at Tuggerah Entrance on a half-time basis with Tumbi Umbi on 16th November 1916. The first teacher was Bernard Dagg.
Teachers : Bernard Dagg 1915-, Alfred Gallop 1920-, John McLean 1930-.


Wyong Public School
In 1887 Charles Alison organised an application to be sent to the Department of Public Instruction seeking an application to establish a school in Wyong.  The application contained the names of 40 children who would attend the school.  Other schools in the area included Kangy Angy and Wyong Creek, but the letter indicated it was some distance from Wyong, and the tracks through the scrub were impassable in wet weather.  The school was originally conducted in a building owned by Charles Alison, Watts Concert Hall and the first teacher was William Berry – the school opened on Monday 2nd July 1888. Charles Alison then donated a two acre site on a reserve which had been set aside in the original sub-division plan for Wyong, the building commenced and Wyong School was opened on 2nd May, 1889. Some pupils trained to become pupil teachers – including Florence Richter in 1893, Lilian Woodbury in 1897 and Olive Woodbury 1902.
Teachers : William Berry 1889-, John Filshie, James Burrell, George Ling, Thomas King 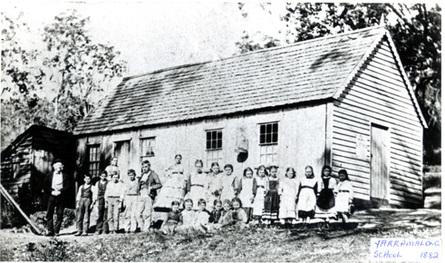 Yarramalong School Pupils c1882
Wyong Creek Public School
In April 1881, Rev. G H Johnson requested the establishment of a school at Wyong Creek.  The Minister of Education approved the request, and in October 1883, William Berry was appointed to open Wyong Creek Lower Provisional School.  The school  building, leased from Thomas Gam, was a split slab building with a bark roof.  The first enrolment of children was on 5th November 1883, with 29 pupils on the roll.  In 1884, the school was reclassified as a public school, which enabled funding for a new school building to be built and the old slab hut became the weather shed.   Local residents built a residence for the newly married teacher Frederick Breakwell.
Teachers:  William Berry 1883-1883, Frederick Breakwell 1894-1907, William Baldwin 1913-1918

Yarramalong Public School
Yarramalong is one of the oldest and most historic schools in the Wyong Shire.  The school opened as a private one on 1st August 1870, with an average weekly attendance of 15 pupils.  Classes were held in a room in the private residence of Mrs Grace Chapman.  In November 1872 the original school was burnt to the ground – it was replaced with a slab structure with a shingled roof.  A solid stone building and teacher’s residence was built in 1890 – these buildings are still used today.
Teachers:  Grace Chapman 1870, Louisa Waters 1872-1877, George Palmer 1877-1884, Randolph  Calov 1895-1910.
More information on these schools is available in the books used to compile this information.
​Wyong Flashbacks by Edward Stinson,
History of the Central Coast Schools by Dept. of Education
History of Wyong Public School by NSW Dept. of Education
​Jilliby Public School Centenary 1880-1989 by Lyn Campbell
Ravensdale and Cedar Brush Creek Schools 1892 and 1901
Tuggerah Public School Centenary 1892-1992
Play the Game - the history of Kanwal Public School by Greg Tunn
Wyong Creek Public School 1883-1983
​